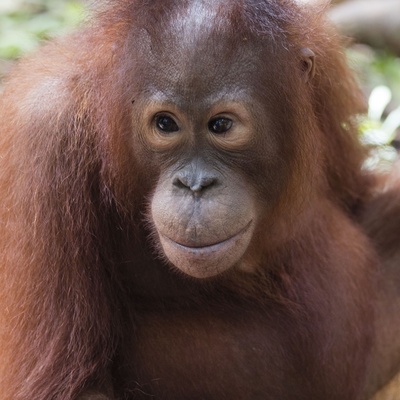 Be it a message to pick up, brought in saying they were found wandering or removed from a life of misery these are a few of the examples of where many of the Orangutans are before they are brought into refuge and placed into the nurseries of many refuges in Indonesia, Sumatra & Borneo.  Olive & Ash on your behalf have adopted a number of Orangutan over the past 10 years and the joy of watching them grow and become more independent is something we would love one of our loyal customers to feel too.

Let me introduce Rahayu.  She was first brought to the Rehabilitation Centre: Orangutan Emergency Centre, Ketapang, West Kalimantan in 2011 suffering from the worst form of malaria. Rajayu was very unwell and it was touch and go for the 1st week and with around the clock attention she was going to survive.  That was 6 years ago and apart from the respiratory issues that most in the rehabilitation Centre suffer during the burning season she is doing great and adapting well in her semi wild environment and is great at building nests.

You will go into a draw to have Rahayu adopted in your or a loved one’s name so place your order and have the chance to watch her grow.

About Olive and Ash